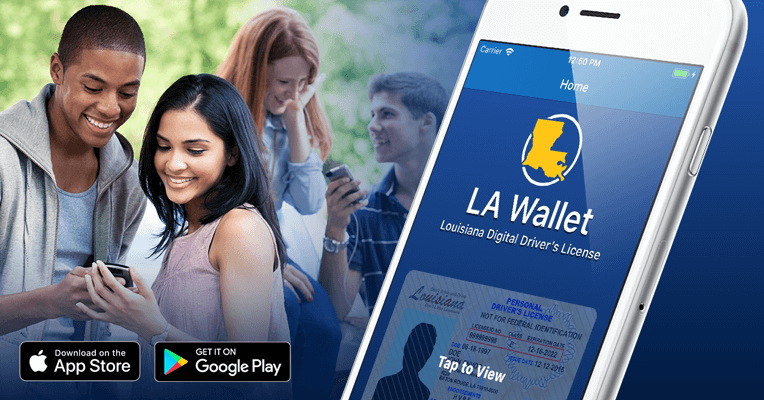 In 2016, Representative Ted James authored HB 481 to make digital driver’s licenses a possibility for Louisiana citizens. The bill passed in the Louisiana Legislature under Act 625. With Representative James’s foresight, Louisiana was poised to be the first state to offer a digital driver’s license, but the State needed a company with mobile software and security expertise to create the platform for Louisiana citizens. Envoc, a creative software solutions company based in Baton Rouge created POS systems for the State’s DMVs and has a reputation for developing innovative and powerful apps. After vetting multiple companies, it was clear that Envoc, an in-state company, was the best choice to create what would eventually become LA Wallet.

Louisiana citizens trust their driver’s licenses to be reliable and authoritative identification credentials. There are hundreds of instances that require an individual to provide a credential to prove their identity. As Louisiana and the rest of the world migrate to more technological advancements, it was only a matter of time for physical identification to catch up. As the trend towards home delivery, rideshares, and other person-to-person interactions that occur or at least begin online, it is more important than ever to provide citizens with tools to protect themselves and their identities.

The Louisiana State and Envoc Approach

It was clear from the beginning that multiple State agencies would need to be involved in the planning of a digital driver’s license, and the team at Envoc listened to everyone’s concerns and accommodated every restriction and stipulation. The first major concerns regarded citizens’ identity security and personal property safety. It was imperative to protect the State’s databases and therefore Louisiana citizens’ personal information, so Envoc developers worked closely with chief security officers to ensure every available security measure was considered. Since citizens would display the digital driver’s license on their personal mobile devices, the Louisiana State Police issued a “no touch” policy to protect citizens from unlawful searches and seizures. Additionally, the State would not profit from the digital driver’s license, so Envoc was challenged to create an app that would not require any additional hardware. Once the State finalized all requirements and stipulations, Envoc began the long process of developing the app.

The Envoc developers were eager to create an app that could do more than display a picture of a license. After months of meetings and creative problem-solving, the Envoc team created solutions for anti-forgery, hands-off applications for law enforcement, and most importantly, tested security protocols to satisfy every State agencies’ requirements. Envoc’s first step was to create a stable platform to communicate with the Office of Motor Vehicle’s database and create a high-resolution rendering of a Louisiana driver’s license. After over 100 people tested the initial pilot app, Envoc developers began building unique features to meet the State’s requirements and innovated other, industry-first functions. In order to protect the digital credentials from forgery, the app obtains several image components and all license data in real-time from the State’s database and displays a timestamp for the most recent information update. Additionally, users can press and hold the screen to display a Louisiana State Seal overlay to provide further validation. This feature satisfies the “No Touch” requirements dictated by the State Police. However, Envoc developers wanted to provide LA Wallet users with the ability to verify another citizen’s license in real-time. The innovative VerifyYou™ system allows an LA Wallet user to scan another user’s unique QR created in-app. LA Wallet users can also scan the AAMVA barcode on the back of a physical license. All these innovative features have led to LA Wallet’s success as the first digital driver’s license in the nation and have provided Louisiana citizens with a powerful tool for personal safety and everyday convenience.

LA Wallet is an app that is the only acceptable form of electronic identification according to the ATC and Louisiana State Police. With zero cost to the state, this app was developed jointly with a software company called Envoc, the State Police, the General Council, and the OMV.

Tell us about your excitement!

We know you are very excited to contact us about the Louisiana Digital Drivers License. Use the form below to send us your question or comments. Or, there may be a human manning the chat component.